The Leaky Cauldron is a prominent blog, social network, and news site for Harry Potter fans that was founded in 2000. It describes itself as “the Harry Potter site of record, hosting the oldest and most comprehensive Potternews archive on the Web.”

Tagline: “The most trusted name in Potter” 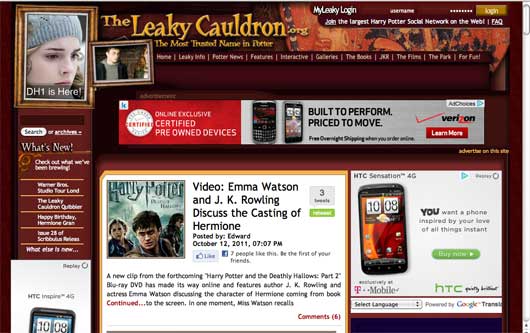 The web site design suggests the color scheme and typefaces used in the Harry Potter films and opening credit sequences, but this look is cluttered by banner advertising across the top and to the right and left sides of the site, in addition to inline within certain blog posts. The site features a central column of blog news entries, and horizontal navigation across the top.

The audience appears to be adult fans of Harry Potter, with no obvious emphasis on a particular age or gender.

Generate revenue through banner advertising and product sales. The site has relatively high traffic for a fan site (87,059 unique visitors in the month of September via Compete.com) and prominently placed banner advertising. It also features “The Cauldron Shop,” an ecommerce store.

The Leaky Cauldron is itself a social media platform with user profiles, chat, forums, clubs, and other means of interacting socially with Potter fans. The Interactive menu category on the site also includes links to Facebook and MySpace pages.  The site has a twitter feed at @leaky.

From the web site: “This site runs on several dedicated servers, both running CentOS Linux and using Lighttpd, PHP 5.1 and MySQL 5. We use a modified version of Mephisto. A separate server houses our forums and our chat room runs on yet another.”  Mephisto is a blogging platform. The site also features ecommerce capability.